This summer, my two boys and I discovered a new favorite activity for our beach days: digging holes. There’s something really satisfying about moving that sand, feeling its weight, and watching the visible progress as you bend the landscape to your will.

To get started, we needed to get some depth quickly to build some momentum for our efforts. Caleb (7) figured out a nice system to divide up our labor. We worked diligently to move buckets and made excellent progress as we focused narrowly on making the hole as deep as we could.

Declan (6) saw the progress and got excited, and wanted to help. Caleb got excited too. At some point all the digging stopped and the focus of attention turned to running around the hole and making noise. After all, what are beach days for but fun? Who could fault children for wanting to play in between bouts of digging? 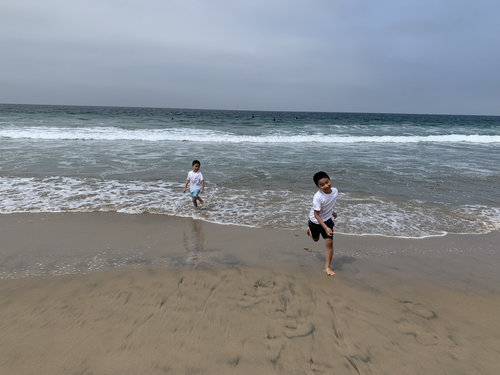 With all the excitement and play around this focus of attention, it wasn’t long before this hole in the sand that was getting nice and deep suddenly collapsed in on itself from the sides.

Caleb and I, who were very invested and focused on the task at hand, looked at the collapsed hole in shock. It was the feeling of a lot of progress, seemingly gone.

The beach has a way of calming us, of relaxing us. And so I turned anew to our greater, original purpose: we were at the beach to have fun. To chill out, dude. There’s no sense getting upset over kids being kids. Might as well put it behind us and get along again.

So, with renewed cheer, we got back to work, accepting that half our progress had been erased and we’d just have to start over. After a few scoops of the bucket, this hole in the sand was again looking to be on track.

What I later realized was that the accidental collapse from the side broadened the hole we were digging. And the sand that fell in, while appearing to set our progress back, was already loose and actually pretty trivial to scoop back out. It wasn’t at all like the effort involved in scraping up the tightly packed sand during our initial dig.

In the end, the accidental collapse from the side made the hole bigger, which gave us what we really wanted: a huge hole in the sand.

We originally wanted to dig a hole so that one kid could jump in there. What we ended up with instead was a hole that could fit all three of us.

Setbacks are frustrating when they’re fresh. In our case, it felt like our work was wasted and we were forced to start over. But we kept at it, and when we were done, what first seemed like a setback turned out to make the end result even better.